The Bastard City is a location in Tyranny, the capital of the Bastard Tier. Formerly a place of wealth and excess on the northern frontier of the Tiers, the corrupt city was the first to fall to Kyros' forces. Pejoratively called the Unwanted Stepson and Cradle of the Unwanted Child, it was chosen by Tunon the Adjudicator as the seat of his power.

Founded in -33 TR upon a natural harbor at the crossroads between realms, the Bastard City was the cultural meeting grounds between the Southern Tiers and the Northern Empire. The wealthy city-state grew into a melting pot of cultures, and a place of commerce and intrigue and gradually earned the name, wearing it with smug pride. Generations of collusion have left the merchant families of the Bastard City in charge of this northern-most Tier. The landed Bastardborne employed large armies to secure themselves against the warring of the Younger Realms to the South, but it is the Overlord’s Northern Empire across the mountains that the rulers feared most and for good reason. The Tiersmen of the South view the Bastard City as a place of wealth and excess, but to the people of the Northern Empire, the Bastard City is little more than a sprawling slum. Its symbolic status as a gateway to the continent made it a natural first target in Kyros' military conquest. [1]

Governed by the ineffectual city council staffed by representatives from the various regions of the Bastard Tear, the overarching concern of council members was personal profit rather than the common good. Policies were determined by whimsy, bribes, and individual convenience. The council and its various administrative positions also doubled as a dumping ground. Families from the Northern Empire would fill posts in the Bastard City with unwanted members, while others would promote people out of the way to various harmless positions in the city administration. As a result, the Bastard City was completely impotent when it came to management. The class structure persisted with little social mobility, the merchant princes profited, while government officials pocketed bribes and engaged in their own, petty power plays. It wasn't until the collapse and annexation of the Northern Empire that the City started to prepare for the inevitable invasion by Kyros.[2]

Following a brilliant campaign that resulted in the fall of the Gates of Judgment and routing of the forces fielded to defend Bastard Tier, the City was occupied by Kyros. While the Disfavored and the Scarlet Chorus moved south, continuing their campaign, Tunon the Adjudicator and the Court of Fatebinders entered the City as an occupation force. In one swift motion, Tunon asserted his authority when he ignored formal greetings and struck the floor of the throne room with his staff. With this simple motion, Tunon passed an Edict on the City. The result was widespread destruction, shaking the City and outright destroying entire districts. Tunon judged the City and those who were found wanting perished under the force of the Edict.[2]

The destroyed districts, giant, gaping holes in the cityscape, became known as Districts-That-Were-Judged. Kyros declared that they would never be rebuilt, serving as a reminder of the Overlord's might, Tunon's authority, and a convenient way to dispose of criminals. Years later, the Bastard City continues to be a jigsaw of destruction and opulence, with glittering wealth existing side by side with sores of rubble and destruction. The destroyed districts are ruins filled with criminals, monsters, and Bane, while the rest of the city continues to thrive. Tunon rules with an efficient hand, through councils, advisors, and of course, his Fatebinders. The bloated bureaucracy that existed before the conquest was slimmed down and reorganized to make it workable.[2]

Tunon is well liked among the people of the City. His Edict and subsequent purges are hailed as beneficial, as they removed those who had no function, service, or qualifications from power while liberating the common man. The result is that Adjudicator enjoys genuine support among the people and the Bastard City requires no martial law or garrison to enforce the law. Each district is provided with a judge and nine soldiers to enforce the law, but out of respect for Tunon, most people reach their own resolutions without involving the authorities.[2] 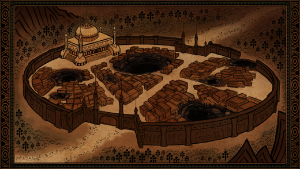