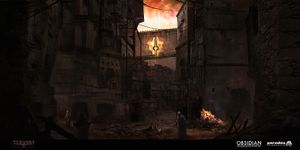 Occon was one of the realms in the Tiers that tried to resist Kyros' invasion and was dismantled after the Conquest, with former soldiers pressed into service.[1]

Little is known about Occon. Queen Lycaerus was the Queen of Occon centuries ago, revered for her peaceful ways. The ancient Weeping Mother statue at Edgering ruins pays homage to her, in fact, indicating the realm was related in some way to Vendrien's Well and the kingdom of Apex. Echocall village is mentioned as claimed by King Occon in the past.[2]