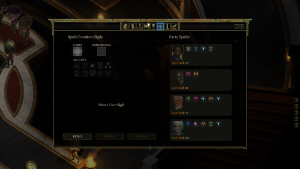 Spell creation allows you to create custom spells based on the sigils in your possession. Spells are created using two or more Sigils. The core sigil determines the type of magic, such as Fire, Frost, or Illusion. The expression sigil determines how that core shapes itself into the world - such as a ball of fire, or frost enchanting a weapon. There are several categories of sigils that can accent a spell, granting it greater range, accuracy, or providing bonus secondary effects.

To create a spell, you must know at least one Core and one Expression sigil. Each combination of sigils requires a certain level of Lore utilize (a sum of the total lore cost of Expression, Accent, and Enhancement Sigils). Characters without enough Lore are unable to wield the most powerful magics.

To begin creating a spell, select the Core Sigil for the type of magic followed by the Expression Sigil to determine what form the spell takes. Each Sigil requires a certain amount of Lore skill to learn and control. Characters must have a skill at least equal to the spell's total difficulty in order to cast the spell.

For example, if you wanted to create a Fireball Spell, you would select the Sigil of Flame as the Core, followed by the Sigil of Directed Force to determine its shape.

Spells have default names based on the selected Core and Expression. You can rename your spells using the spell interface.

Once you have created a spell, use the Assign button to add that spell to one of your active party members. You can assign a spell to more than one character.

If you want to modify the spell later after you've discovered more sigils, select the spell from the party member you wish to modify. The interface will populate with that spell's information, allowing you to modify it and save your changes.