Vendrien's Well is a location in Tyranny.

Vendrien's Well is the name of the central plateau of the Tiers, a mountain-ringed valley of rivers, flood plains, and scattered farmland once ruled by House Vendrien of the realm of Apex. At the heart of the valley is the Mountain Spire, and at the base of the massive stone structure is an old citadel built centuries ago and largely left unused until recent times. Before the conquest, the Well used to be the remote vineyard and elk hunting grounds of Apex's richest. The term Well is used since the all the rivers roll down from the ring of mountains and leave the soils sprouting year round.[1]

Following the Conquest, it became one of the conquered territories, stripped of its realm name and referred to by its geographic name. In 431 TR, it became the site of a major insurgency by the Vendrien Guard, which managed to resist the counter-attack by the Disfavored 1st Cohort, thanks to support from Sages. Pushed beyond the Matani River, the Scarlet Chorus and the Disfavored units that arrived with orders to take down the rebels instead languished in indecisiveness as the rebels - numbering at least four hundred fighters - fortified and entrenched their positions. The plan assumed delegating Chorus units to securing the valley and employing Disfavored brigades to holding the Placid, Littletooth, and Echocall Crossing, but getting the two armies to prove together was impossible. Only Kyros' Edict of Execution motivated them to move forward and set in motion the events leading to the War of Archons. 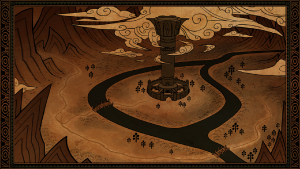